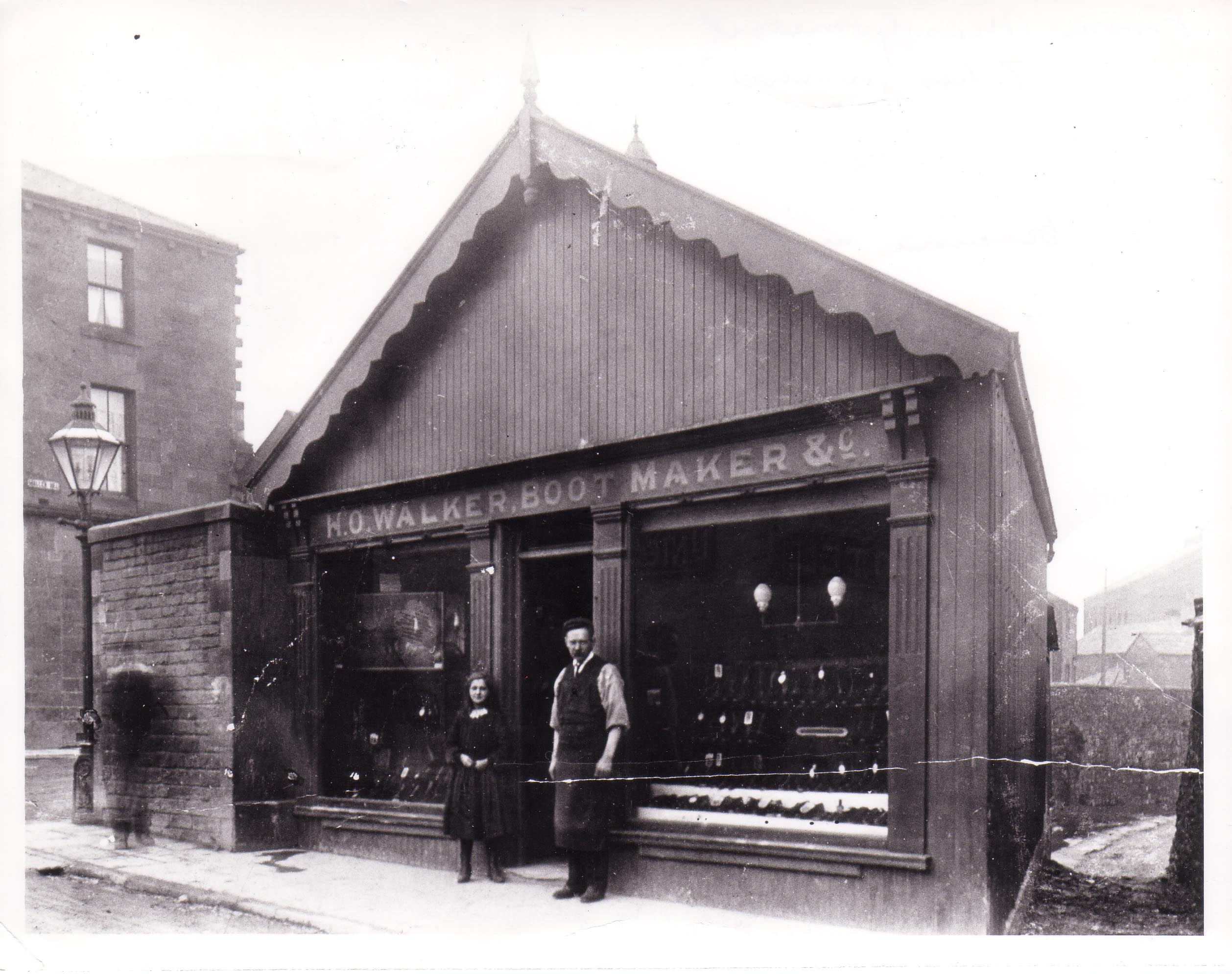 The stone structure by the lamppost at the entrance to Waller Hill was a gents urinal. The beck which now flows under Sunwin House can be seen on the right where it emerges from under the road and the shoe shop. It was quite a deep gully! On the opposite side of the road (to the left of the cameraman) was the road leading down to the stepping stones.
Added by: Peter Sheeran 12 Jul 06
I believe that this shop was run for many years by the Meakin Brothers prior to its demoltion in the 50/60s?
Added by: W E Brown 8 Jul 07
I may be wrong, but I'm sure I remember this shop still selling shoes when I was a child in the 70s. It had yellow plastic up at the windows.
Added by: C Hunter 4 Aug 09
I'm not sure of the exact date the shop closed, but it was run by my Grandad and his brother until the late 1970s when they both retired.
Added by: Douglas Meakin 18 Aug 11
The shop closed in 1979 as it was flooded in the big flood of that year. As Douglas says above it was run by our Grandad and his brother who were both due to retire within a month or two of the floods anyway.
Added by: Paul Jackson 16 May 13
As Douglas says above the shop was run by our grandfather and his brother. It actually closed in June 1979 when, months away from retirement, the big flood happened in Skipton which ultimately resulted in the shop been flooded so closed.
Added by: Paul Jackson 22 Jun 13
KE note: Walker's kept the shoe lasts for the local gentry. The girl in the picture is Evelyn Hall. She used to walk into Skipton from Carleton.
Added by: Admin 22 Jan 18
Does anyone know who the H O Walker was? My ancestors were Walkers in Skipton
Added by: Amanda 15 Jul 19
Amanda he was Henry Ovington Walker born in Skipton 1859. Married to Maria Walker b. 1871.
Added by: Ben McKenzie 20 Oct 19
As kids in the 1950s we used to buy used tennis balls in Meakins (as it then was) that were (allegedly) used at Wimbledon.
Added by: John Buckman 19 Mar 20
I remember visiting this shop many times in the 1940s - run by Fred Meakin and his sons, Fred and Dennis. They were cousins I think (a couple of times removed) and always very welcoming with big smiles.
Added by: Patti Cox 9 Mar 21