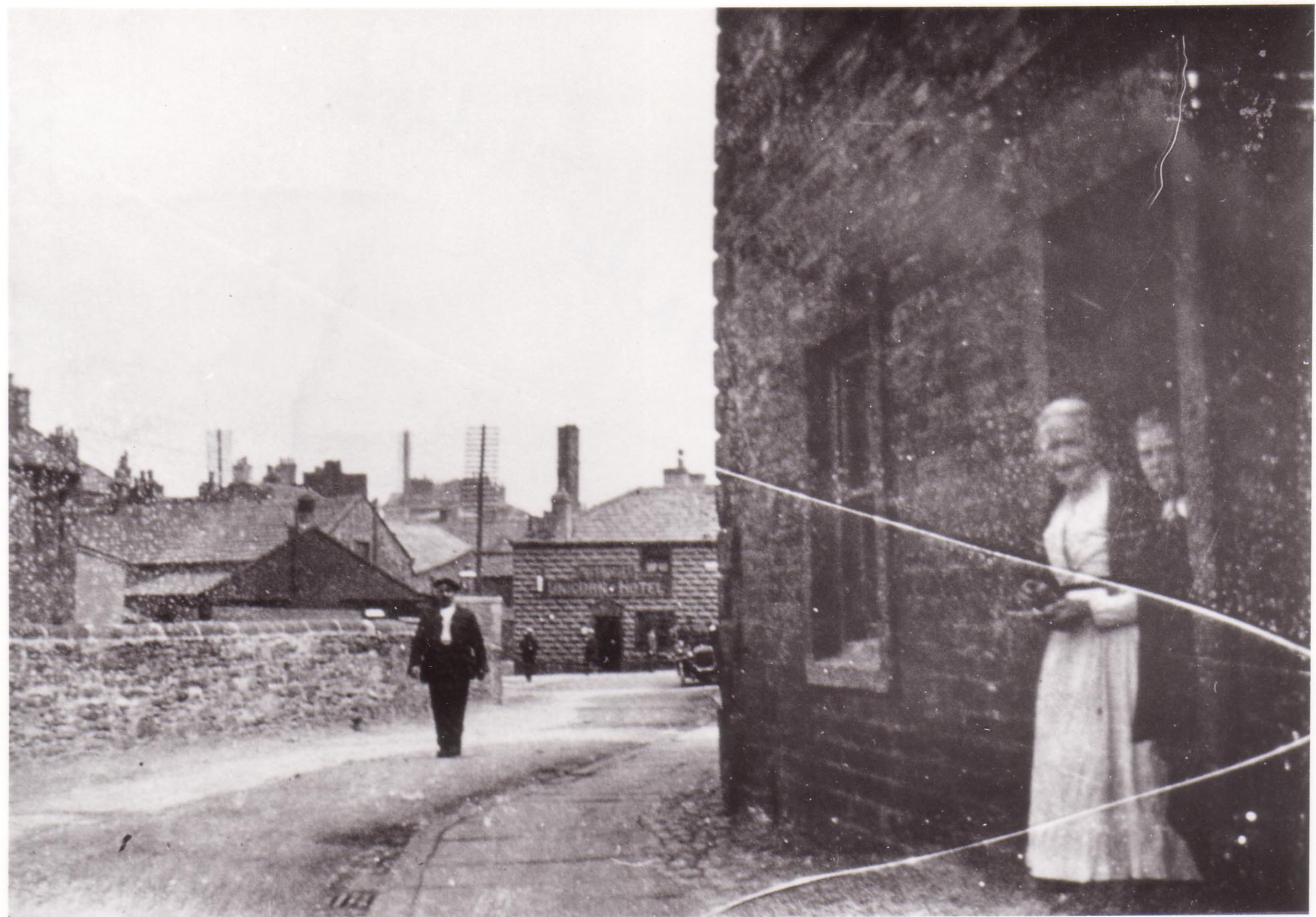 This is Waller Hill as I remember it before the Bus Station was built. Directly in front and across the road is the old Unicorn Hotel (that had been cleared long before) and on the left straddling the beck is the back of the Boot Makers with its triangular roof outline. The man is walking alongside the wall that guarded a deep gully where the beck ran. The road continued on past the cameraman, through a dingy run down area of slum dwellings and onto Gallow Bridge, which was then composed of rotted timbers with high very high sides and holes in the planking. The smell of the Gas and Cokeworks on the other side of the canal was overpowering at times. The new Bus Station opened about May 1950 and there were no shelters at first. When they were eventually built the people who used the Embsay shelter asked for an end wall to be added because the wind whistled through with a vengeance. The name Waller Hill has been moved to the little opening for pedestrians which did not exist at that time, at the far end of the Bus Station, and the only address I can find under that name is the Chinese Restaurant at 26a, I use the name Gallow for the bridge but you will often see it written Gallows on modern maps.
Added by: Peter Sheeran 22 Jul 06
The building with the triangular roof was Meakins. Apart from making boots they also made clogs. I used to lie in bed and listen to the sound of the clogs as workers walked along Sackville St to start work at the mills at 7.30am. I have often wished that I had bought a pair of clogs from Meakins before it closed.
Added by: Pat Attewell (nee Kerrigan) 25 Jun 10
My grandfather Jim McNally was a stoker & crane driver at the gas works (on Gas Street) from the early 1920s till he retired in 1946.
Added by: Bill Midgley 24 Apr 11
Does anyone know where the name Waller in 'Waller Hill' came from. Thank you.
Added by: Lilian Flesher 29 Oct 18
The name Waller comes most probably from one Richard Waller, an artist, who was born in Skipton in 1811. He has several paragraphs in the chapter on ' Worthies of old Skipton', in Dawson's History of Skipton, page 263 to 264.
Added by: Keith Perriman 30 Jun 19
Waller Hill (Bus station area) and Waller Close (Cavendish St area) were in existence before 1757. Perhaps the area belonged to Richard's ancestors. It would be interesting to know the true origin of the name.
Added by: Peter Sheeran 6 Apr 20
I just remember derelict houses and cobbles, at the top of the what is now the buss Station, my dad took me for a look around. Probably about 1969.
Added by: Stephen Rouse 10 Jan 21
I can just remember the last few derelict houses, at the top of the bus station . Remember my dad taking us for a look around,I just remember a cobbled yard.and dark and dingy house's.
Added by: Stephen Rouse 25 May 22