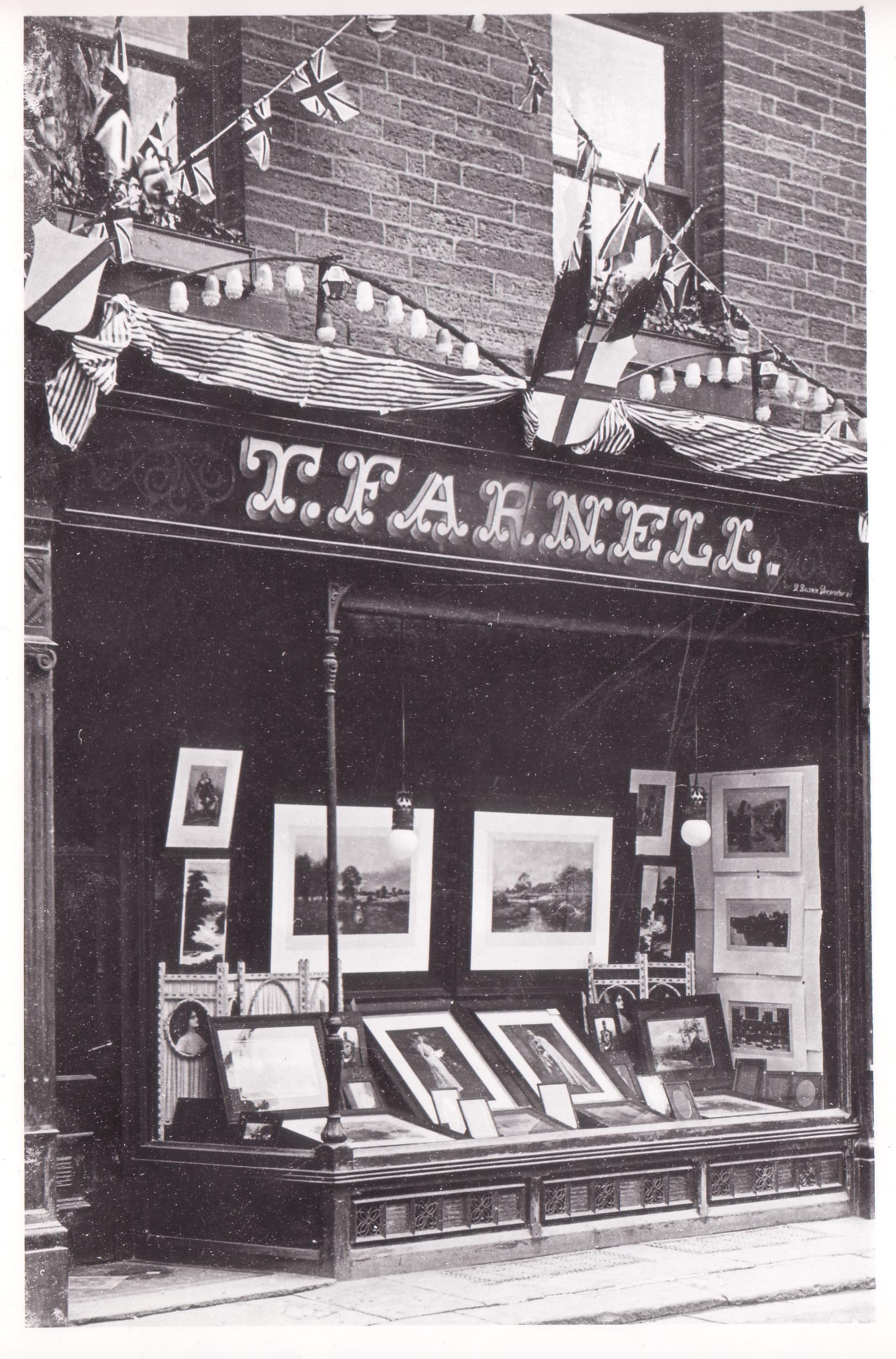 T. Farnell's shop, Coach Street, decorated to celebrate King George V Coronation 1911. HC Foster learned his trade as a wood carver and picture framer from Mr Farnell in this shop. Mr Foster went on to take over the business from Mr Farnell, and later moved to premises across the road.

This is #5 Coach St, as per 1911 Census. By 1955, the shop & the cellar directly underneath was some form of wool shop and was completely separated from the rest of the property. My brother Ronald Maroney and his wife Beryl (Simpson) first lived here after their marriage in 1955. Their children Nigel & Hazel were born whilst they were still there. Next door to the right was my auntie Phyllis (Wilkes) Overend & her husband Tom who ran it as a greengrocers for many many years. Uncle Tom was still taking a van around the nearby villages then, selling their produce, with few people having cars. Over the road for Mr Farnell was #14 a single storey building with a yard at the side. A few years ago, The Craven Herald published a photo of Mr Foster, his lady assistant and my brother which dates it to the late 30s.
Added by: Colin Maroney 10 Oct 15
I have discovered another family connection to this property. On the 1891 Census, it is occupied by Fish Dealer Stephen Maudsley and his large family. His youngest then was 4-yr old Martha who went on to marry my father's eldest brother Isaac Maroney. I believe that at one stage she ran the "sweet shop" just over New Bridge next to the entrance to what I always called The Fire Station Yard. See my comments # 259.
Added by: Colin Maroney 24 Oct 15
This property is currently owned by my father (Anthony Shaw), and has been since late 60s when he ran it as a hairdressers. The neighbouring property was my mother's ladies clothes boutique during the 70/80s called Gabrielle's, which she still owns. I was born in the flats above the property and lived there until '77 when we moved up to Park Avenue. My grandparents then lived in the flat and I moved back in with my grandad in '88 until I left for University in the early 90s. The warehouse building above the archway to the left was also owned by my father for some years and he converted it into a home after several years as a screen printing and picture framing business. Is the above mentioned Maroney the same as the owner of the shoe shop that I remember clearly as a child which was opposite?
Added by: Tom Shaw 9 Sep 19