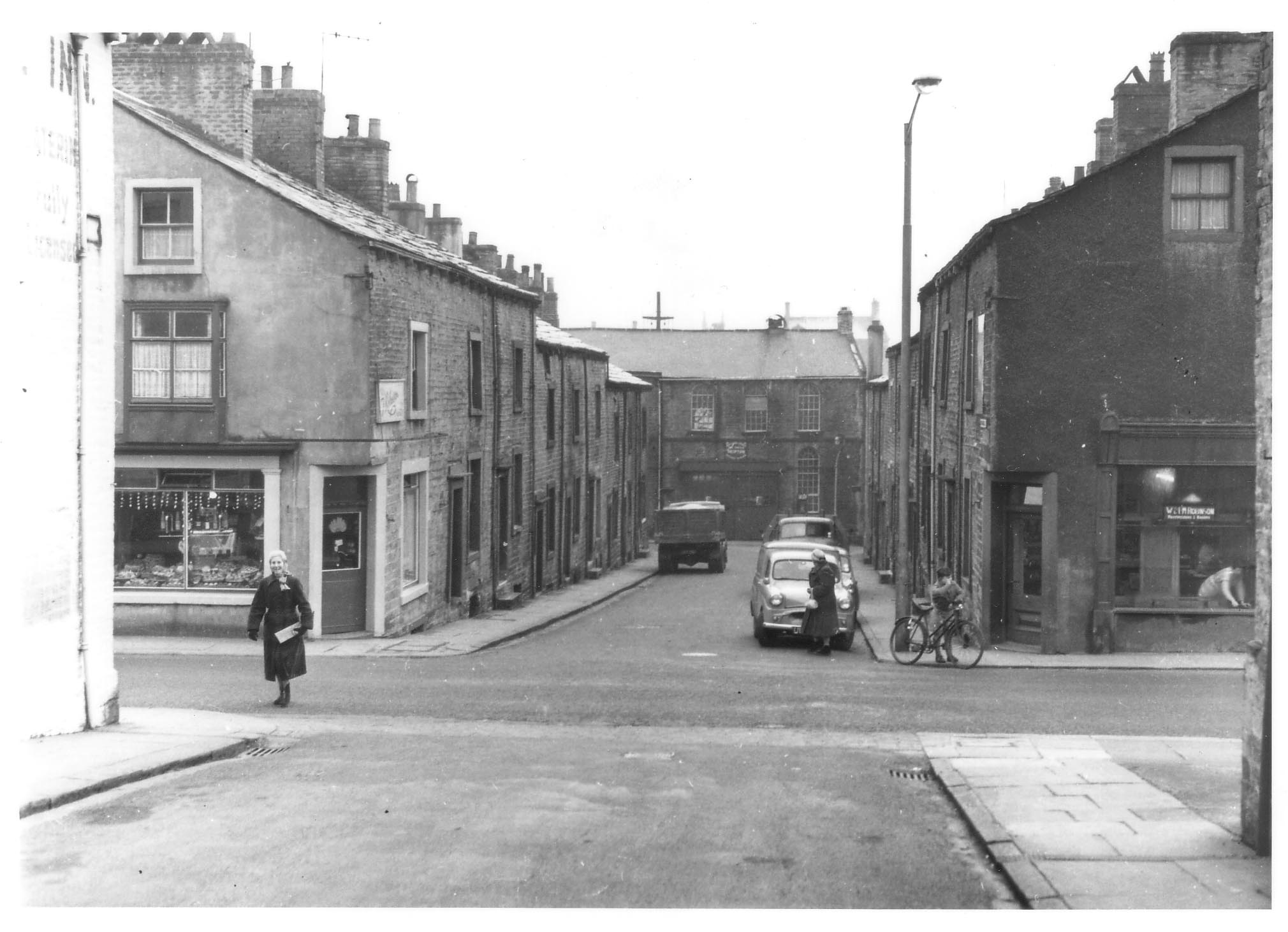 Until 1957 I used to pass along this street on my way to school. It was very rough with irregular rounded stones, grass and weeds. It must have been resurfaced before the houses were demolished.
Added by: Peter Sheeran 19 Dec 05
The doors of the old fire station can be seen at the bottom of the Lower Commercial St. he cross shape visible above the rooftop may have been for drying fire hoses after use. This building was originally a chapel.
Added by: Peter Sheeran 17 Jul 06
The shop on the left was in the late 1940s into the 50s owned by Mr & Mrs Fisher & was a greengrocers .Mr Fisher was an ameteur artist of a very high standard . The shop opposite on the right was a bakery .
Added by: W E Brown  8 Jul 07
i used to work for joe crompton who had the bakers shop on the right as delivery boy on a bike with a large basket on front in 1960 the shop moved to coach street before the street was demolished i also used to live on upper commercial street up to 1957 with my bother roger and parents tom and peggy baxter
Added by: david baxter 26 Dec 07
My parents, Joe and Margaret Crompton, ran the Bakery shop. My mother thinks the photograph was taken in spring 1960. This was my first home.
Added by: Elizabeth nee (Crompton) 9 Nov 10
I identify the commerical inn on the left, but was there a pub also on the right, just creeping in to shot?
Added by: Rob Coates 28 Dec 11
Further to my comments #332, the back of the fire station opened up on to what the 1893 map called "The Dockyard". It was a large yard bounded by lots of warehouse type buildings. By the 40/50s, it was in effect deserted. The only activity I would occasionally see, passing to & from Ermysteds, was the fire brigade cleaning the engine and equipment and with the hose pipes stretched full out on the ground
Added by: Colin Maroney 24 Oct 15
I don't remember another pub opposite The Commercial but my memory may fail me as I was too young to partake. I cycled up Commercial Street for 7 years on my way to Ermysteds Grammar School in the 50s/60s,
Added by: John Buckman 19 Mar 20
I attended St Stephen's School from 1949 to 1957 and passed the Commercial Inn each time and I don't recollect another pub opposite. According to the records, there was a pub on 'Lower' Commercial St called the Joiner's Arms but it was before my time.
Added by: Peter Sheeran 4 Apr 20
My father and mother were licencees of the Commercial Inn on Water Street. I also went to St Stephens school and I remember Comptons the bakers. I did enjoy their school buns.
Added by: Peter Fletcher 5 Nov 20